Something akin to spaghetti alle vongole

He was as happy as a clam.
~ James Hall, The Harpe’s head: a legend of Kentucky, Volume 3

My feet brought me to the door, but my hands did not want to open it. It was odd, I felt like my limbs were all trying to converse with my brain at the same time; and in the end, I put down my handbag and marched back in to the lounge. What was it? – I was impatient to get to work!

But then I understood: all were befuddled as none had had breakfast.

This was not a statement I could refute.

As you may have read in my previous post, I haven’t been awfully inspired in the kitchen lately either. This morning, though, I knew I couldn’t go on blaming Inspiration for hiding away. In a sense, inspiration is like a colour pencil – keep it in your drawer, and it will draw no pictures; use it, and you may have a bad picture, but at least you introduce the possibility of producing a good picture too.

It was, by this time, 8.30am. I looked in the fridge: oh yes, those clams. Another round of internal dialogue: Who eats clams in the morning?? Surely not me?

I did in the end. 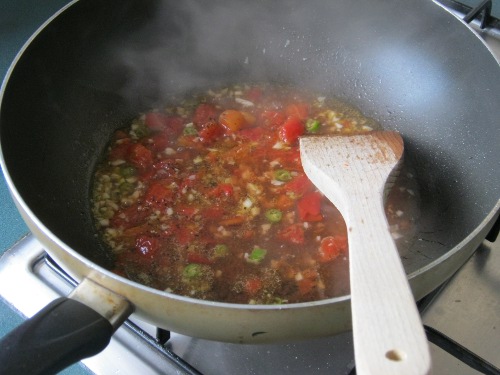 I boiled some water in a saucepan, salted it generously and put some skinny spaghetti in to cook. Next, I chopped up a bright chilli, kept the seeds for luck, smashed two cloves of garlic and tossed them all into a small pool of heated olive oil… oh, shimmering wonder – I cannot remember the last time I so enjoyed the sight of garlic shaking and changing from pale yellow to light golden brown…

Smiling now, I dribbled some sauvignon blanc slowly around the pan, watching the transparent liquid flow elegantly into the mixture, watching the gentle steam rise back up from the pan. After a few minutes, I added in three spoonfuls of diced tomatoes and a couple of happy clams. 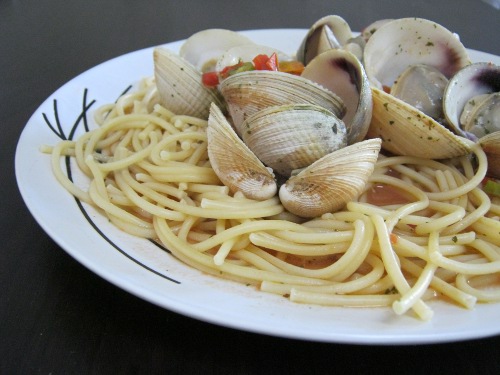 And this is how I came to eat something akin to spaghetti alle vongole for breakfast today (I say akin to, because I have never made it before and because I didn’t use a recipe for it – just made it using what I thought go into this dish).

Tasty, sweet and fragrant – a little wet, but not bad for spontaneous cooking. I really enjoyed it.

Thus satisfied, I opened the door and walked out into dazzling sunshine.

PS. Fijian chillies are… such rascals. When I first saw them, I thought they resembled innocent and charming little feet of elves (such an un-spicy green)… and grabbed a handful of them. Oh, how glad I am that I only chopped one up this morning, and that I touched my nose instead of my eyes after that!

My nose sulked and told me it was kissed by a raging FLAME, and no amount of cold water could convince it otherwise for awhile.

This entry was posted in All, Pasta and tagged clams, food, spaghetti vongole. Bookmark the permalink.

2 responses to “Something akin to spaghetti alle vongole”