If you can talk, you can sing…

If you can talk, you can sing; if you can walk, you can dance.
~ Zimbabwean expression, as quoted by Stan Davis and David McIntosh, The Art of Business 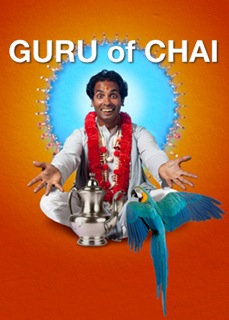 What a treat. Last night, Gudrun and I trailed up to the confusing campus that makes up Auckland University and located, with some trouble, Maidment Theatre. It was well worth it. We stepped gratefully into the warmth (the weather was quite reminiscent of Wellington!)… and into another world.

It wasn’t quite what I expected, admittedly. I guessed that “The Guru of Chai” would be colourful, and fun, and inspirational. And it was. But I didn’t expect it to begin with a philosophical address, and end with a surprising twist. I didn’t expect to witness two men wax magic, conjuring up many characters, many voices, many emotions and a sense of wonder without much help. I didn’t expect a marriage between minimal costumes/props and endless imagination, openness and courage. A dance of talent and practice.

It was so wonderful to bathe in the poignant air of mirth, pathos, thought, and humanity. Watching this, I was at once fully engaged and elsewhere… it made me think of the million ways in which we are different, and the other million things that connect us as people in the world. It reminded me of the hot, bustling parts of Southeast Asia that I grew up in, and the few wayang shows I watched as a child, and coffee from the local coffee shops where we’d sit and sweat in the sheer humidity. It brought to mind Grandma’s shrimp chilli paste – best described as “pungent” within the limitations of English; but stunning applied to bread, or meat. Addictive, even. A blend of simple ingredients that Grandma pounded tirelessly with her mortar & pestle, turning it into a complex paste with an unforgettable flavour… one which I could never (and still can’t) tell where sweet meets hot meets bitter meets… whatever. I can’t describe it…

So… “The Guru of Chai”. If you are in Auckland, you have four days left to catch them before they fly to the good US of A! Go and watch it.

While we’re being arty-farty on this food blog (I figure theatre and music count as food – for the soul)… just last week, I also went to watch a high school orchestra/choir performance, fantastic to watch young talent performing. It was a night which led me down hallways of old dreams, up silent thoughts of what could be – and which cracked open my Russian doll selves and allowed me to be 6, 8, 20, all over again and all at once. I thought about that drama teacher I had in primary school, who was one of the people who taught me the power of Imagination. Do you love music? I hope you tap into its magic…

In other (food-related) news, I finally got to try Oh Calcutta! – I went there this evening with Gill. We shared a bowl of basmati rice and GIGANTIC naan (looked like two full moons tucked into a basket) – and she had lentils, and I the lamb rogan josh (I thought it was quite fitting that we got to eat good food and share good heart and life stories!). Really attentive service and delicious food at this restaurant… Dhanyavād, Meena Anand and team!

This entry was posted in All, Eating out, Food sociology, Theatre. Bookmark the permalink.

4 responses to “If you can talk, you can sing…”