A man, a podcast and meeting Ciaran McMeeken

I have always had a passion for story-telling, creative people and those wonderful books / movies / plays etc that transport you to a whole new magical world. I enjoy good films and music just like most people I know, but until I met my husband, I would never have swum deeper into the world of the creative arts, music, movies – i.e. I would enjoy them when I was there, but I wouldn’t feel a need to read up more about them or listen to commentary around them.

At my first date with Jarred, though, I learned towards the end of our leisurely coffee date that my date (too many dates in this sentence and none are the Medjool sort) was involved with a podcast on entertainment. I was intrigued and secretly glad that I had not known this before we met up, as I would have thought – with great error – that such a man must be superficial and love celebrities and be scarily extroverted and have nothing in common with me. (Okay – I was the shallow judge!)

He asked if I might like to join him at his podcast that afternoon. I looked at his kind face for a few seconds, considering. I got into his car.

As it turns out, it was more than safe – it was great! That day I met his co-host Wal, and a couple of filmmakers who shared their experience and passion in a way that made me reflect on and appreciate films, filmmakers and the creative process more. It was like being backstage, getting to watch a performance from a closer and different vantage point, but better. I was also rather floored by the confidence they all had in front of the camera and mic!

Good surprises come sometimes when you least expect it. I had a lovely evening out with my husband last night, pretending we were in sunny Thailand at happy eatery Kiss Kiss and following up with a cozy coffee-and-slice and Circus Circus, before we headed in to the studio for a podcast session.

I found out that this evening’s guest was singer-songwriter Ciaran McMeeken. Born in Arrowtown and bred in the wild and beautiful South Island of NZ, he was due to launch his self-titled album and debut tour in NZ (both happening today). I was a little sleepy as the night was cold and it was ticking slowly towards my bedtime – but when he arrived and the conversation began, the magic happened. I was a transfixed fly on the wall.

Through lighthearted banter, spontaneous questions and honest answers between them all, I learned a little about Ciaran’s journey, feeling a simultaneous sense of respect and delight. When he sang his beautiful song “Spanish Steps” towards the end, it was like we were at our own private concert. I found myself paddling in memories of home, travels, sunshine, yearnings and writing poetry. (Did you know that one of the best ways you can encourage your own creativity to emerge is to be in the presence of someone who daringly creates and shares his own art?)

For someone who’s sung in front of thousands whilst opening for Ronan Keating, Ciaran was also humble enough to acknowledge the people he’s met who have helped propel him forward. He mentioned a farmer, John, who he once worked alongside. John cut his apprehension down to size (by $18K) with simple, grounded advice and helped him to see that his dream was not as out of reach as he thought. Ciaran left the farm a few days later and as the popular saying goes … the rest is history! (Thanks, John!) 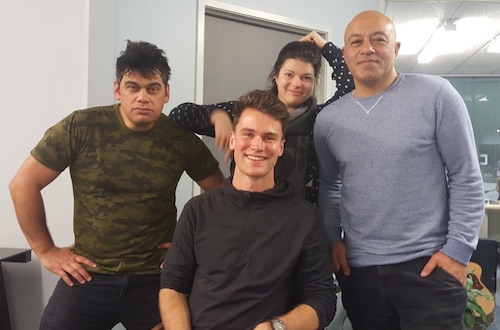 Meeting people, the desire to create and sing, serendipity, home, travel, struggle, goals … the conversation was only around 20 minutes long but touched on many aspects of the creative and human journey (see below). In the end, I was reminded that while luck, budget, kind people, opportunities and things like that play a role in fostering success, it is the decision to step out and say YES that finally makes it all possible.

Personal courage and action have been hugely crucial in bringing Ciaran to this point in his journey and I am positive that for as long as he continues to say YES and express his shining heart, he will enjoy many future successes.

“Like anything, you need a team … you can’t do it by yourself. Like climbing a mountain – you need some sherpas”, said Ciaran. Wise words.

We won’t be surprised when he wins his Grammy.

Tune in to the remarkable Ciaran McMeeken

Posted in All, Behind the scenes, inspiring, Music