We dance round in a ring and suppose,
While the secret sits in the middle and knows.
~ Robert Frost

It is my friend Jane who caused me to take a second look at prunes. 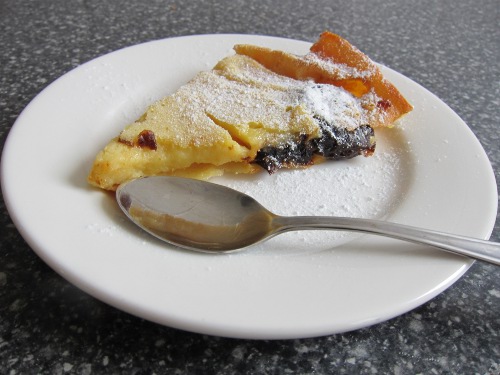 She made a marvellous stovetop lamb tagine once, and from then on I no longer regarded prunes as ugly things prescribed to people battling with constipation. No… despite their dull appearance, they shone in that dish. They were rich and mysterious, exotic and strangely exciting. Sticky-sweet and tinged with a faint liqueur-like flavour. In my imagination they are a little like intoxicated summer fruits waltzing in winter coats.

Incidentally, Jane is also the girl who introduced me to the world of tagines long before I visited Morocco (and in my memory, her tagines rival the ones I tasted there). She didn’t have a tagine pot, but she made beautiful tagines just in a deep saucepan on an electric stove…

Mmmm… I can still remember my first taste of that delicious prune and spice-flavoured lamb. The meat fell gently off the bone with minimal coercion, the moist prunes collapsed clumsily and sweetly as soon as they passed from the fork to my mouth, and everything tasted of love and distant lands.

Somehow, prunes haven’t made their way to my kitchen very much. I’ve eaten them in restaurants once or twice (with duck), and I’ve taken them to work as snack food on occasion, but I can’t remember the last time I cooked with them at home. I guess I also regard them as one of those things that people can have Strong Feelings about, and thus omit them when cooking with/for others (this group of evocative food includes mushrooms, offal, lentils, red bean and eggplants – some of my friends’ faces seem to nearly change colour when I even mention those things). 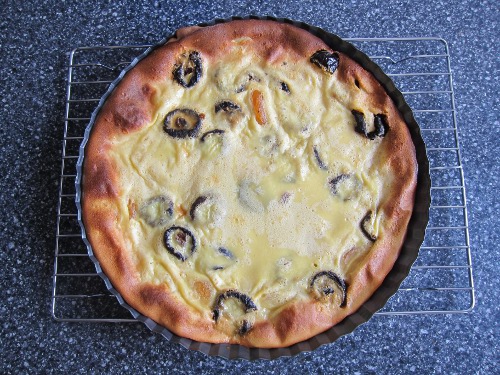 So recently the prunes called out to me from their home in the baking aisle in the supermarket, and I bought a pack of them without knowing what I was going to do with them. As it is, I cooked them with lamb chops the other night and enjoyed that (though I still prefer Jane’s lamb!) – and I had a faint idea of making something sweet with them…

This morning, I woke up wanting to make something for my friend E but unsure of what to make. Various pruney ideas paraded through my mind, but nothing seemed right… till I chanced upon Molly Wizenberg’s recipe for black plum clafoutis. I hadn’t tried clafoutis before, but I was inspired reading this and so my prune and apricot clafoutis experiment came to be.

Verdict: I’ll make clafoutis again, but I won’t make it exactly this way again. E seemed to like it, but I liked the “clafoutis” part of it (somewhere in between custard/milk tart/a soufflé) better than the prunes and apricots in it, as the fruits were still more chewy than tender. I think it would work brilliantly with fresh fruit, or if I had soaked the prunes and apricots for longer. Might try soaking dried fruit overnight next time! 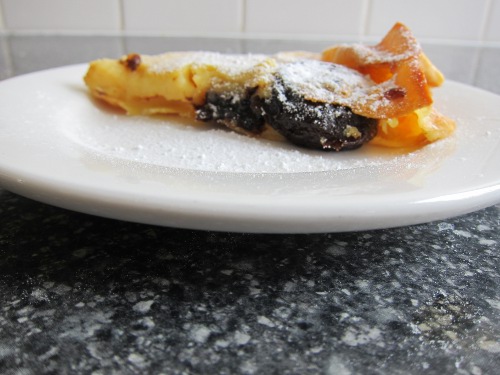 Method:
Place the apricots and prunes in a small bowl and pour the lemon juice and wine over them. Cover the bowl with cling film and refrigerate for 40 minutes (I think it would be better if you soaked them for longer though! See note above).

Preheat the oven to 170°C. Lightly grease a 9-inch pie dish with olive oil or butter. Set aside.

In a medium bowl, whisk the eggs and the sugar until the mixture turns pale yellow (approximately 1 minute). Then add in the vanilla, salt and milk, and whisk further to combine. Sprinkle the flour over the mixture with your fingers and continue to whisk till you have a smooth batter.

Using a slotted spoon, take out the prunes and apricots from the wine and arrange them in a single layer in the bottom of the pie dish. Pour the batter over gently and evenly across the fruits. Do not stir.

Bake the clafoutis for around 45 minutes or until puffed and golden around the edges. Then remove the clafoutis from the oven, and allow it to cool for at least 20 minutes. Dust with icing sugar just before serving. 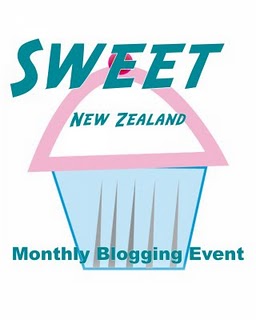 I’m also submitting this entry for Sweet New Zealand, hosted this month by Arfi at HomemadeS by Arfi. Click here to join in the Sweet NZ fun!

15 responses to “Prune and apricot clafoutis”